A robust predictive control for a Quadrotor with an Airsoft-marker 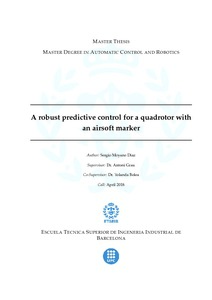 Document typeMaster thesis
Rights accessOpen Access
Abstract
This project is part of a more ambitious European project which consists on the autonomous inspection of petrol pipes. This inspection is done using a custom design drone equipped with a direction system, called gimbal, that allows changing the direction of a set of tools attached to the drone. These tools are a stereo vision system and an airsoft marker, which have special bullets that are used to detect the possible leaks in the pipes in order to fix them. Moreover, the shooting power of the marker can change to adjust according the distance of the pipe. However, the marker introduce into the system an unknown disturbance that can destabilize the drone. Therefore, the main goal of the project is to propose a model predictive controller for the drone. As a first step needed, the project come up with a mathematical model of the drone, specifically a Quadrotor. Also, it is described a way of modeling the Airsoft marker as a disturbance. Then, this model is used in the MPC to calculate the exact control action for satisfying the optimization law, that it is tuned to find a balance between the desired performance and the energy used by the actuators. Finally, a case scenarios is simulated to show how perform the designed controller and the different commands ( roll, pitch and yaw ).
SubjectsDrone aircraft -- Automatic control, Avions no tripulats -- Control automàtic
URIhttp://hdl.handle.net/2117/117613
Collections
Share: