Computational model for the chemo-mechanical mechanism in wound healing 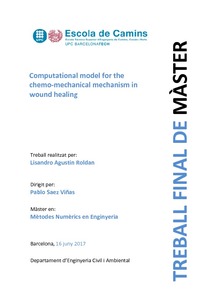 Document typeMaster thesis
Rights accessOpen Access
Abstract
Wounds in multicellular tissue occur regularly through the lifetime of living organisms, and the closure of these gaps is fundamental for their healthy development. From the physiological point of view, the success in this process is of great importance because when misregulated, it can lead to inflammation or and turmogenesis, among other diseases. The wound healing process in epithelial tissue occurs in three different stages. The first one is the assembly of a supra-cellular actomyosin cable and its migration towards the wound edge, which is done through ion signaling and mechanical contractions of the epithelial cells. Later, after its positioning, the cable contracts driving the tissue towards the gap and reducing the wound area. Finally, cell migration towards the interior of the wound ends up sealing the tissue. In this work, a mechanical continuum model for the first two stages is developed and 2D finite element simulations are performed to reproduce experimental cases. The model for the actomyosin cable formation involves the coupling of transient calcium ions transport, with actin fibers and myosin motors recruitment and non-linear mechanics for the tissue behavior. For the contraction stage, the active deformation of the previously formed actomyosin cable is performed. The relative motion of the myosin motors over the actin filaments is modeleded so there exists an active tissue contraction in the direction of those fibers.
SubjectsPhysics, Electromecànica, Física
URIhttp://hdl.handle.net/2117/117590
Collections
Share: