Study of fare integration of bicing in the STI system 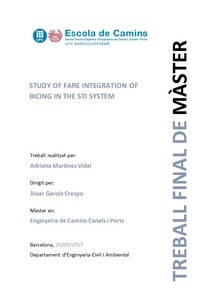 Document typeMaster thesis
Rights accessOpen Access
Abstract
Urban mobility has recently become one of the main issues of local administrations and transport authorities. The public transport market has notice a clear increase in the mobility volume, since people’s tendency is to move to more complex and diverse daily trips. As a result, the demand of an extensive, intensive, flexible and integrated public transport system is becoming one of the main priorities for city halls and transport authorities. New flexible systems such as public bike sharing (PBS) appeared in many European cities as a solution to provide a complementary mode to cover l ast-step of trips inside congested areas. Between 2001 and 2011, above 400 schemes were implemented in the west part of Europe (European Commission, 2011). One of the keys of its success is its proper integration with other modes, which can be differentia ted in three different levels: • Physical integration, which responds to allocation of stations near each other to make easier transfers. • Integrated information, providing information about possible transfers between modes • Fare integration, referred to provide a global fare system for different modes. This project aims to study the particular case of Bicing, the large public bike sharing scheme launched in Barcelona in 2007. Defined as flexible, practical and sustainable way to travel, Bicing is known as one of the most popular schemes in Europe. The system is properly integrated with the other modes operating in the city, since its stations are located close to principal hubs in the city and clear information about the scheme is provided. However, no fare integration has been achieved, since the access to the bike sharing is only available to residents and through an electronical card. As a main point of this project, the possibility to fare integrate Bicing under the already consolidated fare integrated system (STI) in Barcelona will be studied. The main motivation is the recently forecast to launch an electronical card called T-Mobilitat that will supply the existing transport tickets in Barcelona, and could delete all access barriers with Bicing. The document will be separated in three parts, in order to firstly organize all available data and as a result of its analysis, study the possibility of fare integrate the scheme. On the one hand, Bicing data will be collected in order to analyze its demand, supply and financial patterns. On the other hand, the already consolidated performance of the STI system will be analysed, so its financial characteristics can be understood and particularized for each of the integrated modes. As a result, the potential demand and the range of competitiveness of Bicing scheme will be deduced as well as the possibility or not to integrate the scheme into the STI. Different scenarios to study the impact will be exposed, subject to the available data.
SubjectsBicycle commuting, Urban transportation, Desplaçaments en bicicleta, Transport urbà
URIhttp://hdl.handle.net/2117/117567
Collections
Share: