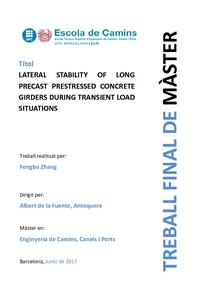 Document typeMaster thesis
Rights accessOpen Access
Abstract
Since the invention of prestressing appeared, this technology has been widely used in civil engineering field. The combination of precast members and prestressing technics has been impelling the improvements in design methods, construction speed, structural performance and more importantly means of reducing cost over these years. Benefits of using precast prestressed concrete structures are easy to be found: reducing the structural deformation, using less steel material, increasing the capacity against cracking, fast speed and ease of erection, etc. Such structures are used in hydraulic structures, road structures, building structures and more commonly in bridge structures. After the world’s first precast prestressed concrete bridge was successfully built in Oued Fodda during year 1936-1937, many of such bridges has been constructed all around the world. Improvements in materials, advances in design method as well as technics have enabled the increase in the range of spans for precast prestressed concrete girders. However, the spans of girders are still under some limitations such as transportation requirements, erecting machine limits and more importantly the safety reasons. Designers tend to pay more attention to the safety of structure during their service period. However, construction period is as much importance as service period for prefabricating structures. Many unexpected accidents have occurred during transportation and lifting phases of over these years. Not only will it influence the process of construction, but also increase the possibility of personnel casualty. The objective of this research work is to investigate the factors which may cause the lateral stability problem of precast prestressed concrete girders during lifting. Based on the analytical model proposed by Robert Mast, a parametric study is carried out in order to obtain the possibility of stability failure in terms of different factors. The most important part of this research work is to build a reliable formula to evaluate the potential failure, which is only accessed through the designing information predefined for the girder such as the geometry of girder, sweep and strength of the material, etc. The formula will be validated by a real failure case and compared with the results from different provisions in current standards.
SubjectsPrestressed concrete construction, Concrete bridges, Formigó pretesat, Ponts de formigó
URIhttp://hdl.handle.net/2117/117565
Collections
Share: