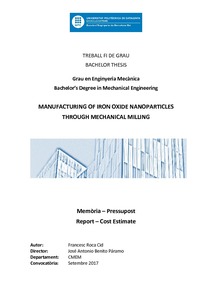 Except where otherwise noted, content on this work is licensed under a Creative Commons license : Attribution-NonCommercial-ShareAlike 3.0 Spain
Abstract
Arsenic contamination in groundwater poses several public health problems worldwide. Various depollution techniques have been engineered and field tested during the last decade to tackle this issue. Some large-scale techniques based upon arsenic adsorption have been tested using nanoscale particles. Due to their large specific surface area, nanoparticles possess a greater reactivity than raw materials or conventional powders. In this work, natural magnetite -an iron oxide- powder has been milled through mechanical milling in a planetary ball mill with the aim of reducing the particle size. The variables for the millings will be the time, the rotational speed, the grinding media and the use of surfactant. These experiments will be characterised by means of laser diffraction and SEM observation. The several results obtained from different experiments show a clear reduction of the size of the particles. Generally, it has also been observed that an increase in the rotational speed leads to greater size reduction. The use of tungsten carbide balls at a speed of 200 rpm and 300 rpm leads to an individual particle size reduction below 1 μm. Particles can be observed through SEM microscopy but laser diffraction shows clearly signs of agglomeration among particles. Moreover, WC balls wore down during the milling and it caused tungsten contamination within the slurry. S110 steel balls, with smaller diameters than WC balls, prevent any contamination and a greater particle size reduction is achieved, with particles being within a nanometric range of around 100 nm. However, the particles still stay agglomerated. When adding a surfactant, the agglomeration effect decreases considerably and SEM microscopy suggests that particle size is even smaller. An amount of surfactant around 0.5% and 0.6% allows great reduction and good observation through SEM. Finally, an experiment using monoethylene glycol resulted in acceptable particle size reduction within the nanometric range, but the high viscosity impeded the characterization of particles size.
SubjectsIron oxides, Nanoparticles, Òxids de ferro, Nanopartícules
DegreeGRAU EN ENGINYERIA MECÀNICA (Pla 2009)
URIhttp://hdl.handle.net/2117/117532
Collections
Share: