Design of an application with Virtual Reality for neurorehabilitation purposes 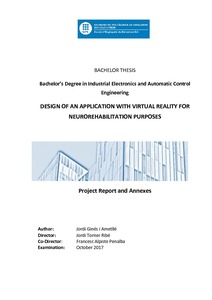 Except where otherwise noted, content on this work is licensed under a Creative Commons license : Attribution-NonCommercial-NoDerivs 3.0 Spain
Abstract
The purpose of this project is to carry out a study of virtual reality and its applications in hospital environments such as neurorehabilitation or physiotherapy, since it is a technology which is starting to be used nowadays. A 3D virtual reality application for a basic demonstration of a game which could be useful for these trainings will be also done. To achieve this, we will work with Unity, a graphic motor for 3D application and game creation. The hardware for the development of the virtual reality immersive system will be the HTC Vive system, which additionally allows position and movement detection in a room scale using the light signalling technology Lighthouse. This application will focus on the creation of an immersive videogame to track upper extremity movement from the user so he can do his rehabilitation training in a more enjoyable and motivating way, in the form of avoiding obstacles in the videogame using those movements. In addition, the necessary informatic support will be done so the application can be used in a virtual reality headset to improve visual immersion. It will also be obtained some parameter indicating how the game play was.
SubjectsVirtual reality, Realitat virtual, Realitat virtual -- Aplicacions industrials
DegreeGRAU EN ENGINYERIA ELECTRÒNICA INDUSTRIAL I AUTOMÀTICA (Pla 2009)
URIhttp://hdl.handle.net/2117/117500
Collections
Share: