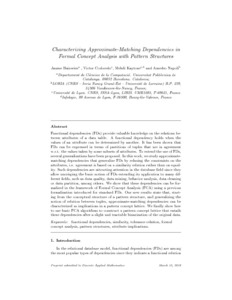 Codocedo, Victor
Kaytoue, Mehdi
Napoli, Amedeo
Document typeArticle
Rights accessOpen Access
Abstract
Functional dependencies (FDs) provide valuable knowledge on the relations between attributes of a data table. A functional dependency holds when the values of an attribute can be determined by another. It has been shown that FDs can be expressed in terms of partitions of tuples that are in agreement w.r.t. the values taken by some subsets of attributes. To extend the use of FDs, several generalizations have been proposed. In this work, we study approximatematching dependencies that generalize FDs by relaxing the constraints on the attributes, i.e. agreement is based on a similarity relation rather than on equality. Such dependencies are attracting attention in the database field since they allow uncrisping the basic notion of FDs extending its application to many different fields, such as data quality, data mining, behavior analysis, data cleaning or data partition, among others. We show that these dependencies can be formalized in the framework of Formal Concept Analysis (FCA) using a previous formalization introduced for standard FDs. Our new results state that, starting from the conceptual structure of a pattern structure, and generalizing the notion of relation between tuples, approximate-matching dependencies can be characterized as implications in a pattern concept lattice. We finally show how to use basic FCA algorithms to construct a pattern concept lattice that entails these dependencies after a slight and tractable binarization of the original data.
CitationBaixeries, J., Codocedo, V., Kaytoue, M., Napoli, A. Characterizing approximate-matching dependencies in formal concept analysis with pattern structures. "Discrete applied mathematics", 26 Abril 2018.
URIhttp://hdl.handle.net/2117/117479
DOI10.1016/j.dam.2018.03.073
ISSN0166-218X
Publisher versionhttps://www.sciencedirect.com/science/article/pii/S0166218X18301811
Collections
Share: