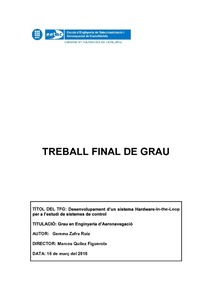 Document typeBachelor thesis
Rights accessOpen Access
Abstract
The main goal of this project is to develop a test bench to study the behaviour of control systems applied to different plants using the technique of the Hardware- In-the-Loop (HIL) simulation. This test bench will be useful both to test the operation of the plant to study and to carry out control system practices in the educational field. In addition, it will be done using two different software tools (LabVIEW and Matlab) in order to explore and compare them, especially in the part of control and simulation and graphical interface. The content of each chapter is detailed below. The first chapter presents the state of the art in the HIL simulation area is carried out and a brief description of the characteristics of a PID controller and a data acquisition device (DAQ) is done. In the second and third chapter we introduce the tools and materials necessary to implement the project. The programs of LabVIEW and Matlab, the Arduino UNO board and the DAQ NI USB 6001 are included. The fourth and fifth chapters are the main body of the project. The first one deals with the phase that involves only a software part, in which a thermal plant is characterized and two similar simulators are created to control any plant. The second deals with the phase that involves a hardware part, as well as software. This phase works only with LabVIEW, the desired test bench is developed and the correct operation is checked. The sixth chapter contains the conclusions drawn from the development process of the test bench and the verification of its operation. The two software tools used are also compared and the HIL technique is evaluated. Finally, in the last chapter we discuss the possible works that could be done in the future as a continuation of what has been done here.
SubjectsHardware-In-the-Loop, Hardware-In-the-Loop
DegreeGRAU EN ENGINYERIA D'AERONAVEGACIÓ (Pla 2010)
URIhttp://hdl.handle.net/2117/117457
Collections
Share: