A bilingual Spanish-Catalan database of units for concatenative synthesis 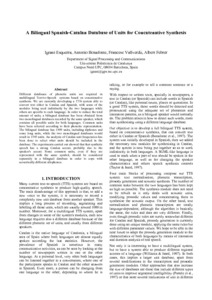 Febrer Godayol, Albert
Document typeConference report
Rights accessOpen Access
All rights reserved. This work is protected by the corresponding intellectual and industrial property rights. Without prejudice to any existing legal exemptions, reproduction, distribution, public communication or transformation of this work are prohibited without permission of the copyright holder
Abstract
Different databases of phonetic units are required in multilingual Text-to-Speech systems based on concatenative synthesis. We are currently developing a TTS system able to convert text either in Catalan and Spanish, with some of the modules being used indistinctly by the two languages while others are specific to each language. In order to reduce the total amount of units, a bilingual database has been obtained from two monolingual databases recorded by the same speaker, which contains all possible units for both languages. Common units have been selected according to their phonetic representation. The bilingual database has 1099 units, including diphones and some long units, while the two monolingual databases would result in 1545 units. An analysis of Catalan unit frequencies has been done to select what units should be included in the database. The experiments carried out showed that that synthetic speech has a strong Catalan accent, probably due to the speaker's accent. Some common units, even if they are represented with the same symbol, should be considered separately in a bilingual database in order to cope with acoustically different allophones.
CitationEsquerra, I., Bonafonte, A., Vallverdu, F., Febrer, A. A bilingual Spanish-Catalan database of units for concatenative synthesis. A: International Conference on Language Resource & Evaluation. "LREC 1998: proceedings of the 1st International Conference on Language Resource & Evaluation: Granada, Spain: 28-30 May 1998". 1998.
URIhttp://hdl.handle.net/2117/117415
Other identifiershttps://pdfs.semanticscholar.org/9774/4aebf283270359736fbc26d79d2ed4af4f27.pdf?_ga=2.203950288.1184909114.1526662256-992397385.1521741609
Collections
Share: