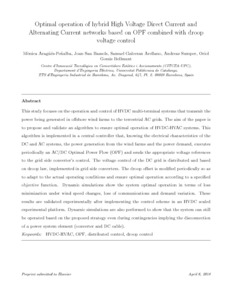 Document typeArticle
Rights accessOpen Access
Abstract
This study focuses on the operation and control of HVDC multi-terminal systems that transmit the power being generated in offshore wind farms to the terrestrial AC grids. The aim of the paper is to propose and validate an algorithm to ensure optimal operation of HVDC-HVAC systems. This algorithm is implemented in a central controller that, knowing the electrical characteristics of the DC and AC systems, the power generation from the wind farms and the power demand, executes periodically an AC/DC Optimal Power Flow (OPF) and sends the appropriate voltage references to the grid side converter's control. The voltage control of the DC grid is distributed and based on droop law, implemented in grid side converters. The droop offset is modified periodically so as to adapt to the actual operating conditions and ensure optimal operation according to a specified objective function. Dynamic simulations show the system optimal operation in terms of loss minimization under wind speed changes, loss of communications and demand variation. These results are validated experimentally after implementing the control scheme in an HVDC scaled experimental platform. Dynamic simulations are also performed to show that the system can still be operated based on the proposed strategy even during contingencies implying the disconnection of a power system element (converter and DC cable).
CitationAragüés, M., Sau, J., Galceran-Arellano, S., Sumper, A., Gomis-Bellmunt, O. Optimal operation of hybrid high voltage direct current and alternating current networks based on OPF combined with droop voltage control. "International journal of electrical power and energy systems", Octubre 2018, vol. 101, p. 176-188.
URIhttp://hdl.handle.net/2117/117346
DOI10.1016/j.ijepes.2018.03.010
ISSN0142-0615
Publisher versionhttps://www.journals.elsevier.com/international-journal-of-electrical-power-and-energy-systems
Collections
Share: