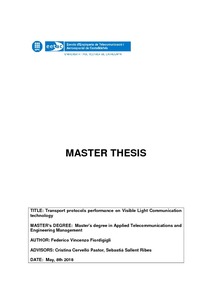 Document typeMaster thesis
Rights accessOpen Access
Abstract
In the last decade, wireless communications have seen a dramatic growth of the traffic demand and the radio spectrum seems to not be able to keep this pace alone due to the limited available bandwidth. For this reason, Visible Light Communication is being considered as a potential access option for the next-generation of wireless communication technologies (5G) and it is gaining an increasing attention: this technology, which works modulating the intensity of the light in the “visible” part of the EM spectrum, use LEDs for the dual-purpose of illumination and communication. VLC shows great features such as ultra-high bandwidth, robustness to electromagnetic interference, a virtually unlimited frequency reuse and a cost effectiveness due to the unregulated spectrum and the use of the LEDs. The aim of this work is to further analyze the performance of the TCP protocol in the VLC networks and to provide a tool for the simulation of complex VLC networks. Using the NS3 framework, an existing module has been further developed and tested to simulate a VLC network and a simple scenario, with an AP and a user moving in random walk on the boundaries. The TCP performance has been evaluated, comparing two congestion control algorithms (New Reno and Westwood) and analyzing different parameters such as throughput, dropped packets, congestion window behavior and end-to-end delay. After that, a new module has been designed and developed to overcome the limitations of the previous one, such as the two devices per channel limit and the inadequate interference model, and to allow more complex simulation scenarios. The results obtained demonstrated the good qualities of the VLC channel, where the main limitations are due to the physical devices parameters, like the FOV and the semi-angle at half-power, that strictly define the coverage area. About the TCP performance analysis, the results showed that TCP works very well in the coverage, it has several problems handling the movement of the receiver among the boundaries. However, by analyzing different parameters such as the sender buffer size, the channel delay and the source application data rate, Westwood showed to have a better performance than New Reno, especially in terms of mean delay and BER.
SubjectsWireless LANs, Comunicació sense fil, Sistemes de, Xarxes locals sense fil Wi-Fi
URIhttp://hdl.handle.net/2117/117319
Collections
Share: