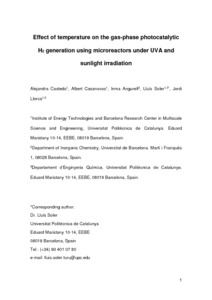 Document typeArticle
Rights accessOpen Access
Abstract
The effect of temperature on the photocatalytic hydrogen generation from a gaseous water-ethanol mixture has been tested in a silicone microreactor containing nine microchannels of 500 µm (width) × 1 mm (depth) × 47 mm (length) coated with Au/TiO2photocatalyst under UVA irradiation. Kinetic analyses have indicated that the hydrogen production rate follows the Langmuir-Hinshelwood model. The effect of temperature from 298 to 348 K has been determined by thermodynamic parameters, such as enthalpy (¿H¿), entropy (¿S¿) and Gibbs free energy (¿G¿) of activation, using the transition state theory (TST). The apparent rate constants (kapp) are higher by increasing the temperature, and the activation energy has been determined to be 24 ± 1 kJ·mol-1. In order to evaluate if solar concentration could be used to enhance the photoproduction of hydrogen, the reaction has also been conducted under direct sunlight using a solar concentrator of about 1 m in diameter. Finally, the microreactor has been scaled out by a factor of ca. 10 to a device containing thirty-two microchannels of 500 µm (width) × 1 mm (depth) × 117.5 mm (length). The specific (i.e. per irradiated area of catalyst) hydrogen production rates of both microreactors using sunlight are very similar suggesting that this technology could lead to viable solar hydrogen production.
CitationCastedo, A., Casanovas, A., Angurell, I., Soler, L., Llorca, J. Effect of temperature on the gas-phase photocatalytic H2 generation using microreactors under UVA and sunlight irradiation. "Fuel (Guildford)", 15 Juny 2018, vol. 222, p. 327-333.
URIhttp://hdl.handle.net/2117/117309
DOI10.1016/j.fuel.2018.02.128
ISSN0016-2361
Publisher versionhttps://www.sciencedirect.com/science/article/pii/S0016236118303119?via%3Dihub
Collections
Share: