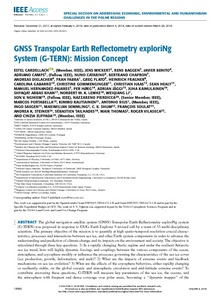 The global navigation satellite system (GNSS) Transpolar Earth Reflectometry exploriNg system (G-TERN) was proposed in response to ESA's Earth Explorer 9 revised call by a team of 33 multi-disciplinary scientists. The primary objective of the mission is to quantify at high spatio-temporal resolution crucial characteristics, processes and interactions between sea ice, and other Earth system components in order to advance the understanding and prediction of climate change and its impacts on the environment and society. The objective is articulated through three key questions. 1) In a rapidly changing Arctic regime and under the resilient Antarctic sea ice trend, how will highly dynamic forcings and couplings between the various components of the ocean, atmosphere, and cryosphere modify or influence the processes governing the characteristics of the sea ice cover (ice production, growth, deformation, and melt)? 2) What are the impacts of extreme events and feedback mechanisms on sea ice evolution? 3) What are the effects of the cryosphere behaviors, either rapidly changing or resiliently stable, on the global oceanic and atmospheric circulation and mid-latitude extreme events? To contribute answering these questions, G-TERN will measure key parameters of the sea ice, the oceans, and the atmosphere with frequent and dense coverage over polar areas, becoming a “dynamic mapper”of the ice conditions, the ice production, and the loss in multiple time and space scales, and surrounding environment. Over polar areas, the G-TERN will measure sea ice surface elevation (<;10 cm precision), roughness, and polarimetry aspects at 30-km resolution and 3-days full coverage. G-TERN will implement the interferometric GNSS reflectometry concept, from a single satellite in near-polar orbit with capability for 12 simultaneous observations. Unlike currently orbiting GNSS reflectometry missions, the G-TERN uses the full GNSS available bandwidth to improve its ranging measurements. The lifetime would be 2025-2030 or optimally 2025-2035, covering key stages of the transition toward a nearly ice-free Arctic Ocean in summer. This paper describes the mission objectives, it reviews its measurement techniques, summarizes the suggested implementation, and finally, it estimates the expected performance.
CitationCardellach Galí, Estel, Wickert, J., Baggen, R., Camps, A., Hernandez, M. GNSS transpolar earth reflectometry exploriNg system (G-TERN): mission concept. "IEEE access", 9 Març 2018, vol. 6, p. 13980-14018.
URIhttp://hdl.handle.net/2117/117154
DOI10.1109/ACCESS.2018.2814072
ISSN2169-3536
Publisher versionhttps://ieeexplore.ieee.org/document/8310650/