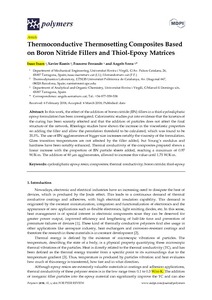 Document typeArticle
Rights accessOpen Access
Abstract
In this work, the effect of the addition of boron nitride (BN) fillers in a thiol-cycloaliphatic epoxy formulation has been investigated. Calorimetric studies put into evidence that the kinetics of the curing has been scarcely affected and that the addition of particles does not affect the final structure of the network. Rheologic studies have shown the increase in the viscoelastic properties on adding the filler and allow the percolation threshold to be calculated, which was found to be 35.5%. The use of BN agglomerates of bigger size increases notably the viscosity of the formulation. Glass transition temperatures are not affected by the filler added, but Young’s modulus and hardness have been notably enhanced. Thermal conductivity of the composites prepared shows a linear increase with the proportion of BN particle sheets added, reaching a maximum of 0.97 W/K·m. The addition of 80 µm agglomerates, allowed to increase this value until 1.75 W/K·m.
CitationIsarn, I., Ramis, X., Ferrando, F., Serra, M. À. Thermoconductive thermosetting composites based on boron nitride fillers and thiol-epoxy matrices. "Polymers", 7 Març 2018, vol. 10, núm. 3, p. 1-18.
URIhttp://hdl.handle.net/2117/117134
DOI10.3390/polym10030277
ISSN2073-4360
Publisher versionhttp://www.mdpi.com/2073-4360/10/3/277
Collections
Share: