Magnitude and frequency relations: are there geological constraints to the rockfall size? 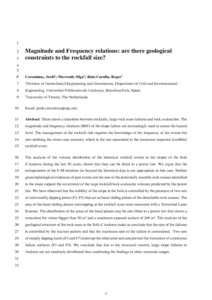 Document typeArticle
Rights accessOpen Access
Abstract
There exists a transition between rockfalls, large rock mass failures, and rock avalanches. The magnitude and frequency relations (M/F) of the slope failure are increasingly used to assess the hazard level. The management of the rockfall risk requires the knowledge of the frequency of the events but also defining the worst case scenario, which is the one associated to the maximum expected (credible) rockfall event. The analysis of the volume distribution of the historical rockfall events in the slopes of the Solà d’Andorra during the last 50 years shows that they can be fitted to a power law. We argue that the extrapolation of the F-M relations far beyond the historical data is not appropriate in this case. Neither geomorphological evidences of past events nor the size of the potentially unstable rock masses identified in the slope support the occurrence of the large rockfall/rock avalanche volumes predicted by the power law. We have observed that the stability of the slope at the Solà is controlled by the presence of two sets of unfavorably dipping joints (F3, F5) that act as basal sliding planes of the detachable rock masses. The area of the basal sliding planes outcropping at the rockfall scars was measured with a terrestrial laser scanner. The distribution of the areas of the basal planes may be also fitted to a power law that shows a truncation for values bigger than 50 m2 and a maximum exposed surface of 200 m2. The analysis of the geological structure of the rock mass at the Solà d’Andorra makes us conclude that the size of the failures is controlled by the fracture pattern and that the maximum size of the failure is constrained. Two sets of steeply dipping faults (F1 and F7) interrupt the other joint sets and prevent the formation of continuous failure surfaces (F3 and F5). We conclude that due to the structural control, large slope failures in Andorra are not randomly distributed thus confirming the findings in other mountain ranges.
Description
The final publication is available at Springer via http://dx.doi.org/10.1007%2Fs10346-017-0910-z
CitationCorominas, J., Mavrouli, O., Ruiz, R. Magnitude and frequency relations: are there geological constraints to the rockfall size?. "Landslides", Maig 2018, vol. 15, núm. 5, p. 829-845.
URIhttp://hdl.handle.net/2117/117100
DOI10.1007/s10346-017-0910-z
ISSN1612-510X
Publisher versionhttps://link.springer.com/article/10.1007%2Fs10346-017-0910-z
Other identifiershttps://www.researchgate.net/publication/320859532_Magnitude_and_frequency_relations_are_there_geological_constraints_to_the_rockfall_size
Collections
Share: