Topography of Generically Folded Spacecapes: Towards a Cognitive Metatheory in Architectural Design 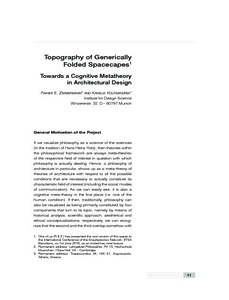 If we visualize philosophy as a science of the sciences (in the tradition of Hans Heinz Holz), then theories within the philosophical framework are always meta-theories of the respective field of interest in question with which philosophy is actually dealing. Hence, a philosophy of architecture in particular, shows up as a meta-theory of theories of architecture with respect to all the possible conditions that are necessary to actually constitute its characteristic field of interest (including the social modes of communication). As we can easily see, it is also a cognitive meta-theory in the first place (i.e. one of the human condition). If then, traditionally, philosophy can also be visualized as being primarily constituted by four components that turn to its topic, namely by means of historical analysis, scientific approach, aesthetical and ethical conceptualizations, respectively, we can recognize that the second and the third overlap somehow with the architectural activities. This is certainly true since the establishment of architecture as a field of activity of its own, separated from building and engineering, as was achieved in the epoch of the Italian Renaissance by Brunelleschi, Alberti, and others.
URIhttp://hdl.handle.net/2117/117050
ISSN1579-4431