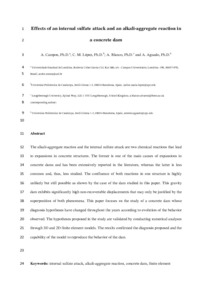 Document typeArticle
Rights accessOpen Access
Abstract
The alkali-aggregate reaction and the internal sulfate attack are two chemical reactions that lead to expansions in concrete structures. The former is one of the main causes of expansions in concrete dams and has been extensively reported in the literature, whereas the latter is less common and, thus, less studied. The confluence of both reactions in one structure is highly unlikely but still possible as shown by the case of the dam studied in this paper. This gravity dam exhibits significantly high non-recoverable displacements that may only be justified by the superposition of both phenomena. This paper focuses on the study of a concrete dam whose diagnosis hypotheses have changed throughout the years according to evolution of the behavior observed. The hypotheses proposed in the study are validated by conducting numerical analyses through 3D and 2D finite element models. The results confirmed the diagnosis proposed and the capability of the model to reproduce the behavior of the dam.
CitationCampos, A., Lopez, C., Blanco, A., Aguado, A. Effects of an internal sulfate attack and an alkali-aggregate reaction in a concrete dam. "Construction & building materials", Març 2018, vol. 166, p. 668-683.
URIhttp://hdl.handle.net/2117/117024
DOI10.1016/j.conbuildmat.2018.01.180
ISSN0950-0618
Publisher versionhttps://www.sciencedirect.com/science/article/pii/S0950061818302046
Other identifiershttps://www.researchgate.net/publication/323237654_Effects_of_an_internal_sulfate_attack_and_an_alkali-aggregate_reaction_in_a_concrete_dam
Collections
Share: