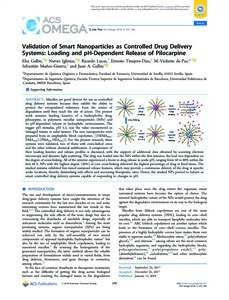 Except where otherwise noted, content on this work is licensed under a Creative Commons license : Attribution-NonCommercial-NoDerivs 3.0 Spain
Abstract
Micelles are good devices for use as controlled drug delivery systems because they exhibit the ability to protect the encapsulated substance from the routes of degradation until they reach the site of action. The present work assesses loading kinetics of a hydrophobic drug, pilocarpine, in polymeric micellar nanoparticles (NPs) and its pH-dependent release in hydrophilic environments. The trigger pH stimulus, pH 5.5, was the value encountered in damaged tissues in solid tumors. The new nanoparticles were prepared from an amphiphilic block copolymer, [(HEMA19%-DMA31%)-(FMA5%-DEA45%)]. For the present research, three systems were validated, two of them with cross-linked cores and the other without chemical stabilization. A comparison of their loading kinetics and release profiles is discussed, with the support of additional data obtained by scanning electron microscopy and dynamic light scattering. The drug was loaded into the NPs within the first minutes; the load was dependent on the degree of cross-linking. All of the systems experienced a boost in drug release at acidic pH, ranging from 50 to 80% within the first 48 h. NPs with the highest degree (20%) of core cross-linking delivered the highest percentage of drug at fixed times. The studied systems exhibited fine-tuned sustained release features, which may provide a continuous delivery of the drug at specific acidic locations, thereby diminishing side effects and increasing therapeutic rates. Hence, the studied NPs proved to behave as smart controlled drug delivery systems capable of responding to changes in pH.
CitationGalbis, E., Iglesias, N., Lucas, R., Tinajero, E., Muñoz, S. Validation of smart nanoparticles as controlled drug delivery systems: loading and pH-dependent release of pilocarpine. "ACS omega", 25 Setembre 2017, vol. 3, núm. 1, p. 375-382.
URIhttp://hdl.handle.net/2117/117012
DOI10.1021/acsomega.7b01421
ISSN2470-1343
Publisher versionhttps://pubs.acs.org/doi/full/10.1021/acsomega.7b01421
Collections
Share: