Rational Engineering of Multiple Active Sites in an Ester Hydrolase 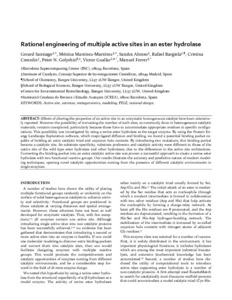 Ferrer, Manuel
Document typeArticle
PublisherAmerican Chemical Society
Rights accessOpen Access
European Commission's projectINMARE - Industrial Applications of Marine Enzymes: Innovative screening and expression platforms to discover and use the functional protein diversity from the sea (EC-H2020-634486)
Abstract
Effects of altering the properties of an active site in an enzymatic homogeneous catalyst have been extensively reported. However, the possibility of increasing the number of such sites, as commonly done in heterogeneous catalytic materials, remains unexplored, particularly because those have to accommodate appropriate residues in specific configurations. This possibility was investigated by using a serine ester hydrolase as the target enzyme. By using the Protein Energy Landscape Exploration software, which maps ligand diffusion and binding, we found a potential binding pocket capable of holding an extra catalytic triad and oxyanion hole contacts. By introducing two mutations, this binding pocket became a catalytic site. Its substrate specificity, substrate preference, and catalytic activity were different from those of the native site of the wild type ester hydrolase and other hydrolases, due to the differences in the active site architecture. Converting the binding pocket into an extra catalytic active site was proven to be a successful approach to create a serine ester hydrolase with two functional reactive groups. Our results illustrate the accuracy and predictive nature of modern modeling techniques, opening novel catalytic opportunities coming from the presence of different catalytic environments in single enzymes.
CitationSantiago, G. [et al.]. Rational Engineering of Multiple Active Sites in an Ester Hydrolase. "Biochemistry", 30 Març 2018, vol. 57, núm. 15, p. 2245-2255.
URIhttp://hdl.handle.net/2117/116934
DOI10.1021/acs.biochem.8b00274
ISSN0006-2960
Publisher versionhttps://pubs.acs.org/doi/10.1021/acs.biochem.8b00274
Collections
Share: