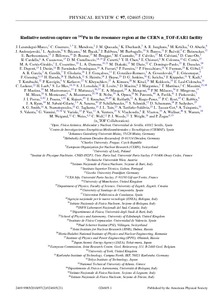 Radiative neutron capture on 242Pu in the resonance region at the CERN n_TOF-EAR1 facility (2,219Mb)
Share:

The spent fuel of current nuclear reactors contains fissile plutonium isotopes that can be combined with uranium to make mixed oxide (MOX) fuel. In this way the Pu from spent fuel is used in a new reactor cycle, contributing to the long-term sustainability of nuclear energy. However, an extensive use of MOX fuels, in particular in fast reactors, requires more accurate capture and fission cross sections for some Pu isotopes. In the case of 242Pu there are sizable discrepancies among the existing capture cross-section measurements included in the evaluations (all from the 1970s) resulting in an uncertainty as high as 35% in the fast energy region. Moreover, post-irradiation experiments evaluated with JEFF-3.1 indicate an overestimation of 14% in the capture cross section in the fast neutron energy region. In this context, the Nuclear Energy Agency (NEA) requested an accuracy of 8% in this cross section in the energy region between 500 meV and 500 keV. This paper presents a new time-of-flight capture measurement on 242Pu carried out at n_TOF-EAR1 (CERN), focusing on the analysis and statistical properties of the resonance region, below 4 keV. The 242Pu(n,gamma) reaction on a sample containing 95(4) mg enriched to 99.959% was measured with an array of four C6D6 detectors and applying the total energy detection technique. The high neutron energy resolution of n_TOF-EAR1 and the good statistics accumulated have allowed us to extend the resonance analysis up to 4 keV, obtaining new individual and average resonance parameters from a capture cross section featuring a systematic uncertainty of 5%, fulfilling the request of the NEA.
CitationLerendegui-Marco, J., Guerrero, C., Mendoza, E., Casanovas, A., Calviño, F., Cortes, G. Radiative neutron capture on 242Pu in the resonance region at the CERN n_TOF-EAR1 facility. "Physical Review C", 6 Febrer 2018, vol. 97, núm. 2, p. 024605-1-024605-21.
URIhttp://hdl.handle.net/2117/116893
DOI10.1103/PhysRevC.97.024605
ISSN2469-9985
Publisher versionhttps://journals.aps.org/prc/abstract/10.1103/PhysRevC.97.024605