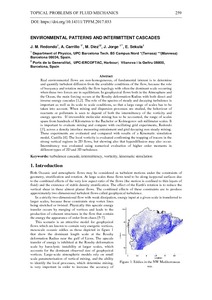 Sekula, Emil
Document typeConference report
Rights accessOpen Access
Abstract
Real environmental flows are non-homogeneous, of fundamental interest is to determine and quantify turbulent diffusion from the available conditions of the flow, because the role of buoyancy and rotation modify the flow topology with often the dominant scale occurring when these two forces are in equilibrium. In geophysical flows both in the Atmosphere and the Ocean, the main forcing occurs at the Rossby deformation Radius with both direct and inverse energy cascades [1,2]. The role of the spectra of steady and decaying turbulence is important as well as its scale to scale conditions, so that a large range of scales has to be taken into account. When mixing and dispersion processes are studied, the behaviour of reactants or pollutants is seen to depend of both the intermittency of the vorticity and energy spectra. If irreversible molecular mixing has to be accounted, the range of scales spans from hundreds of Kilometres to the Bachelor or Kolmogorov sub millimeter scales. It is important to evaluate mixing and compare with oscillating grid experiments, Redondo [3], across a density interface measuring entrainment and grid decaying non steady mixing. These experiments are evaluated and compared with results of a Kinematic simulation model, Castilla [4]. The local vorticity is evaluated confirming the trapping of tracers in the strong vertical regions in 2D flows, but showing also that hyperdiffusion may also occur. Intermittency was evaluated using numerical evaluation of higher order moments in different types of 2D and 3D turbulence.
CitationRedondo, J. M., Carrillo, J.A., Diez, M., Jorge, J., Sekula, E. Enviromental patterns and intermittent cascades. A: Topical Problems of Fluid Mechanics. "Proceedings Topical Problems of Fluid Mechanics 2017, Prague, 2017". 2017, p. 259-266.
URIhttp://hdl.handle.net/2117/116834
DOI10.14311/TPFM.2017.033
ISBN978-80-87012-61-1
Publisher versionhttp://www.it.cas.cz/fm2015/im/admin/showfile/data/my/Papers/2017/33-TPFM2017.pdf
Collections
Share: