A route to chaos in the Boros-Moll map 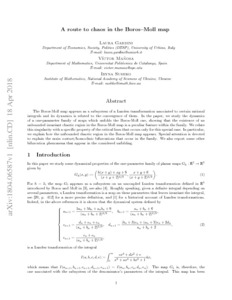 Sushko, Iryna
Document typeResearch report
Rights accessOpen Access
All rights reserved. This work is protected by the corresponding intellectual and industrial property rights. Without prejudice to any existing legal exemptions, reproduction, distribution, public communication or transformation of this work are prohibited without permission of the copyright holder
Abstract
The Boros-Moll map appears as a subsystem of a Landen transformation associated to certain rational integrals and its dynamics is related to the convergence of them. In the paper, we study the dynamics of a one-parameter family of maps which unfolds the Boros-Moll one, showing that the existence of an unbounded invariant chaotic region in the Boros-Moll map is a peculiar feature within the family. We relate this singularity with a specific property of the critical lines that occurs only for this special case. In particular, we explain how the unbounded chaotic region in the Boros-Moll map appears. Special attention is devoted to explain the main contact/homoclinic bifurcations that occur in the family. We also report some other bifurcation phenomena that appear in the considered unfolding.
Description
Preprint
CitationGardini, L., Mañosa, V., Sushko, I. "A route to chaos in the Boros-Moll map". 2018.
Is part ofarXiv:1804.06587 [nlin.CD]
URIhttp://hdl.handle.net/2117/116829
URL other repositoryhttps://arxiv.org/abs/1804.06587
Collections
Share: