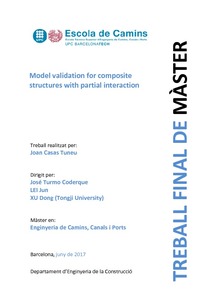 CovenanteeTong ji da xue
Document typeMaster thesis
Rights accessOpen Access
Abstract
In the last decades, the use of concrete and steel composite beam structural systems has received significant attention both numerically and experimentally. This popularity is due to the advantages it provides in terms of cost, structural behaviour and construction speed. In a steelcomposite beam, the compressive strength and mass of the concrete slab and the tensile strength of the steel are cleverly combined, and connected with shear struts so that they act compositely. Depending on the grade of connection between both elements, given mainly by the type and number of shear struts, composite beams can be classified in beams with full composite action, with partial composite action or without composite action. In this latter two cases, there exist a relative slip at the interface of both materials. Traditionally, some assumptions were considered in previous studies regarding this horizontal displacement. In this study, by means of the strength of materials theory, it is sought to validate the hypothesis which considersthat the horizontal displacement at the centroid of any cross section is equal to the horizontal displacements at the cross-section edges, which has been considered in former researches. To do so, it has been applied an update on the assumption regarding the horizontal displacement at the interface of a simply supported composite beam with partial interaction being null. The slip in this case is the highest possible, therefore it is sufficient to validate composite beams with partial interaction at any rate. This study is aimed to developed a numerical method able to solve the equations defining the stated problem and analyse whether the new assumption on the horizontal displacement may mean a significant effect for modelling composite beams with partial interaction.
SubjectsConcrete construction, Concrete bridges, Construccions de formigó, Ponts de formigó
URIhttp://hdl.handle.net/2117/116802
Collections
Share: