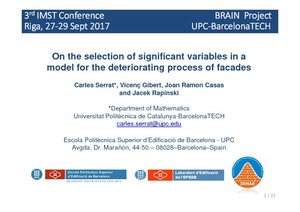 Rapinski, Jacek
Document typeConference lecture
PublisherInstitute of Physics (IOP)
Rights accessOpen Access
Abstract
Serrat and Gibert (2011) introduced the use of survival analysis techniques for the study of time-to-failure in the façades of a building stock. Recently, those techniques have been implemented in a predictive system that incorporates the inspection methodology together with the statistical methodology (Gibert et al., 2014; Serrat et al., 2017). The system proposes a network of urban laboratories for building research analysis and information with the aim of modeling the degradation time based on the information from all the cities participating in the project, from a multiscale perspective. The approach is population based, that is from the manager of the building stock point of view, in order to obtain information on the evolution of the stock across time, and to help the manager in the decision making process on global maintenance strategies. For the decision making it is crutial to determine those covariates -like materials, morfology and characteristics of the façade, orientation or environmental conditions- that play a significant role in the progression of different failures in the service life of the façade. The proposed platform also incorporates an open source GIS plugin that includes survival and test moduli that allow the investigator to model the time until a lesion taking into account the variables collected during the inspection process. The aim of this paper is double: a) to shortly introduce the predictive system, as well as the inspection and the analysis methodologies and b) to introduce and illustrate the modeling strategy for the deteriorating process of an urban front. The illustration will be focused on the city of L’Hospitalet de Llobregat (Barcelona, Spain) in which more than 14.000 facades have been inspected and analyzed.
CitationSerrat, C., Gibert, V., Casas, J., Rapinski, J. On the selection of significant variables in a model for the deteriorating process of facades. A: Innovative Materials, Structures and Technologies. "IOP Conference Series: Materials Science and Engineering, 251 (1), 2017". Londres: Institute of Physics (IOP), 2017, p. 012071-1-012071-8.
URIhttp://hdl.handle.net/2117/116800
DOI10.1088/1757-899X/251/1/012071
ISBN1757-899X
Publisher versionhttp://iopscience.iop.org/article/10.1088/1757-899X/251/1/012071/pdf
Collections
Share: