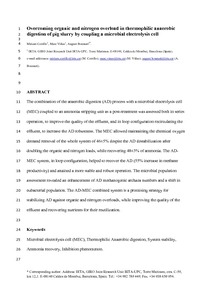 Except where otherwise noted, content on this work is licensed under a Creative Commons license : Attribution-NonCommercial-NoDerivs 3.0 Spain
Abstract
The combination of the anaerobic digestion (AD) process with a microbial electrolysis cell (MEC) coupled to an ammonia stripping unit as a post-treatment was assessed both in series operation, to improve the quality of the effluent, and in loop configuration recirculating the effluent, to increase the AD robustness. The MEC allowed maintaining the chemical oxygen demand removal of the whole system of 46 ± 5% despite the AD destabilization after doubling the organic and nitrogen loads, while recovering 40 ± 3% of ammonia. The AD-MEC system, in loop configuration, helped to recover the AD (55% increase in methane productivity) and attained a more stable and robust operation. The microbial population assessment revealed an enhancement of AD methanogenic archaea numbers and a shift in eubacterial population. The AD-MEC combined system is a promising strategy for stabilizing AD against organic and nitrogen overloads, while improving the quality of the effluent and recovering nutrients for their reutilization.
CitationCerrillo, M., Viñas , M., Bonmatí, A. Overcoming organic and nitrogen overload in thermophilic anaerobic digestion of pig slurry by coupling a microbial electrolysis cell. "Bioresource technology", Setembre 2016, vol. 216, p. 362-372.
URIhttp://hdl.handle.net/2117/116789
DOI10.1016/j.biortech.2016.05.085
ISSN0960-8524
Collections
Share: