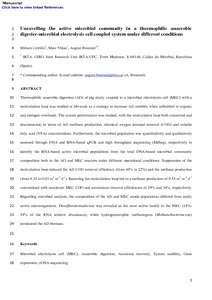 Except where otherwise noted, content on this work is licensed under a Creative Commons license : Attribution-NonCommercial-NoDerivs 3.0 Spain
Abstract
Thermophilic anaerobic digestion (AD) of pig slurry coupled to a microbial electrolysis cell (MEC) with a recirculation loop was studied at lab-scale as a strategy to increase AD stability when submitted to organic and nitrogen overloads. The system performance was studied, with the recirculation loop both connected and disconnected, in terms of AD methane production, chemical oxygen demand removal (COD) and volatile fatty acid (VFA) concentrations. Furthermore, the microbial population was quantitatively and qualitatively assessed through DNA and RNA-based qPCR and high throughput sequencing (MiSeq), respectively to identify the RNA-based active microbial populations from the total DNA-based microbial community composition both in the AD and MEC reactors under different operational conditions. Suppression of the recirculation loop reduced the AD COD removal efficiency (from 40% to 22%) and the methane production (from 0.32 to 0.03 m3m-3d-1). Restoring the recirculation loop led to a methane production of 0.55 m3m-3d-1concomitant with maximum MEC COD and ammonium removal efficiencies of 29% and 34%, respectively. Regarding microbial analysis, the composition of the AD and MEC anode populations differed from really active microorganisms. Desulfuromonadaceae was revealed as the most active family in the MEC (18%–19% of the RNA relative abundance), while hydrogenotrophic methanogens (Methanobacteriaceae) dominated the AD biomass.
CitationCerrillo, M., Viñas , M., Bonmatí, A. Unravelling the active microbial community in a thermophilic anaerobic digester-microbial electrolysis cell coupled system under different conditions. "Water research (Oxford)", Març 2017, vol. 110, p. 192-201.
URIhttp://hdl.handle.net/2117/116787
DOI10.1016/j.watres.2016.12.019
ISSN0043-1354
Collections
Share: