Closure of the stellar hydrodynamic equations for arbitrary distributions 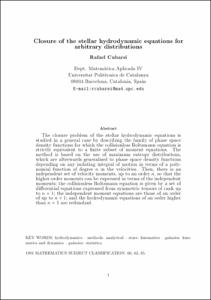 Except where otherwise noted, content on this work is licensed under a Creative Commons license : Attribution-NonCommercial-NoDerivs 3.0 Spain
Abstract
The closure problem of the stellar hydrodynamic equations is studied in a general case by describing the family of phase space density functions for which the collisionless Boltzmann equation is strictly equivalent to a finite subset of moment equations. The method is based on the use of maximum entropy distributions, which are afterwards generalised to phase space density functions depending on any isolating integral of motion in terms of a polynomial function of degree $n$ in the velocities. Then, there is an independent set of velocity moments, up to an order $n$, so that the higher-order moments can be expressed in terms of the independent moments; the collisionless Boltzmann equation is given by a set of differential equations expressed from symmetric tensors of rank up to $n+1$; the independent moment equations are those of an order of up to $n+1$; and the hydrodynamic equations of an order higher than $n+1$ are redundant.
URIhttp://hdl.handle.net/2117/11678
Collections
Share: