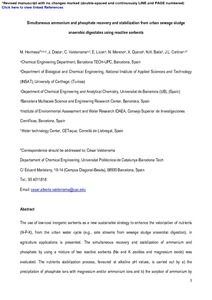 Document typeArticle
PublisherElsevier
Rights accessOpen Access
Abstract
The use of low-cost inorganic sorbents as a new sustainable strategy to enhance the valorization of nutrients (N-P-K), from the urban water cycle (e.g., side streams from sewage sludge anaerobic digestion), in agriculture applications is presented. The simultaneous recovery and stabilization of ammonium and phosphate by using a mixture of two reactive sorbents (Na and K zeolites and magnesium oxide) was evaluated. The nutrients stabilization process, favoured at alkaline pH values, is carried out by a) the precipitation of phosphate ions with magnesium and/or ammonium ions and b) the sorption of ammonium by Na- and K-zeolites. MgO(s) promoted the stabilization of phosphate as bobierrite (Mg3(PO4)2(s)) or struvite (MgNH4PO4(s)) depending on the applied dose. Doses with the stoichiometric molar ratio of Mg/P promote the formation of bobierrite, while molar ratios higher than 3 favour the formation of struvite. Na zeolites (NaP1-NA, NaP1-IQE) demonstrated efficiency on ammonium stabilization between 60 ± 2 (for 15 gZ/L) to 90 ± 3% (for 50 gZ/L). The ammonium recovery efficiency is limited by the zeolite sorption capacity. If the target of the fertilizing criteria should include K, then the use of a K-zeolite (e.g., 5AH-IQE) provides a good solution. The optimum pH for the precipitation of struvite and bobierrite is 9.5 and the optimum pH for ammonium removal is between 4 and 8.5. N is present in higher concentrations (up 0.7–1 g NH4+/L) when pH is ranged between 8.2 and 8.6. The ammonium recovery ratios were better than those previously reported using only magnesium oxide or even a more expensive reagent as newberrite (MgHPO4(s)). The recovery mechanisms described generate low-solubility stabilized nutrients forms that potentially can be applied as slow-release fertilizers in agriculture. Thus, the use in agriculture of blends of digested sludge with low-solubility stabilized nutrients forms will improve soils quality properties in terms of organic matter and nutrients availability.
CitationHermassi, M., Dosta, J., Valderrama, C., Licon, E., Moreno Palmerola, Natàlia, Querol , X., Batis, N., Cortina, J. Simultaneous ammonium and phosphate recovery and stabilization from urban sewage sludge anaerobic digestates using reactive sorbents. "Science of the total environment", 15 Juliol 2018, vol. 630, p. 781-789.
URIhttp://hdl.handle.net/2117/116760
DOI10.1016/j.scitotenv.2018.02.243
ISSN0048-9697
Publisher versionhttps://www.sciencedirect.com/science/article/pii/S0048969718306429?via%3Dihub
Collections
Share: