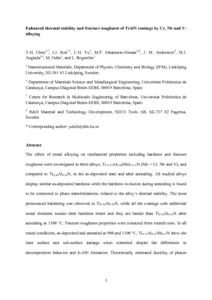 Odén, Magnus
Rogstrom, Lina
Document typeArticle
PublisherElsevier
Rights accessOpen Access
Abstract
The effect of metal alloying on mechanical properties including hardness and fracture toughness were investigated in three alloys, Ti~0.33Al0.50(Me)~0.17N (Me¿=¿Cr, Nb and V), and compared to Ti0.50Al0.50N, in the as-deposited state and after annealing. All studied alloys display similar as-deposited hardness while the hardness evolution during annealing is found to be connected to phase transformations, related to the alloy's thermal stability. The most pronounced hardening was observed in Ti0.50Al0.50N, while all the coatings with additional metal elements sustain their hardness better and they are harder than Ti0.50Al0.50N after annealing at 1100¿°C. Fracture toughness properties were extracted from scratch tests. In all tested conditions, as-deposited and annealed at 900 and 1100¿°C, Ti0.33Al0.50Nb0.17N show the least surface and sub-surface damage when scratched despite the differences in decomposition behavior and h-AlN formation. Theoretically estimated ductility of phases existing in the coatings correlates well with their crack resistance. In summary, Ti0.33Al0.50Nb0.17N is the toughest alloy in both as-deposited and post-annealed states.
CitationChen, Y. H., Roa, J.J., Yu, C., Johansson, M., Andersson, J., Anglada, M., Oden, M., Rogstrom, L. Enhanced thermal stability and fracture toughness of TiAlN coatings by Cr, Nb and V-alloying. "Surface and coatings technology", 25 Maig 2018, vol. 342, p. 85-93.
URIhttp://hdl.handle.net/2117/116751
DOI10.1016/j.surfcoat.2018.02.059
ISSN0257-8972
Publisher versionhttps://www.sciencedirect.com/science/article/pii/S0257897218301853
Collections
Share: