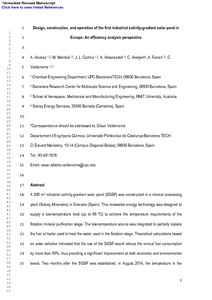 Document typeArticle
Rights accessOpen Access
Abstract
A 500 m2 industrial salinity-gradient solar pond (SGSP) was constructed in a mineral processing plant (Solvay Minerales) in Granada (Spain). This renewable energy technology was designed to supply a low-temperature heat (up to 60 °C) to achieve the temperature requirements of the flotation mineral purification stage. The low-temperature source was integrated to partially replace the fuel oil boiler used to heat the water used in the flotation stage. Theoretical calculations based on solar radiation indicated that the use of the SGSP would reduce the annual fuel consumption by more than 50%, thus providing a significant improvement at both economic and environmental levels. Two months after the SGSP was established, in August 2014, the temperature in the storage zone of the SGSP reached approximately 90 °C. The overall performance was evaluated in two periods (2014 and 2015) in terms of the retrofitting of mining facility with a solar pond and a new method to assess the thermal efficiency of the solar pond in a long-term perspective has been proposed. The overall efficiencies obtained after the first and second operation periods were 10 and 12%, respectively, with maximum values of 28 and 24% obtained during the first operation months. Regarding the economic savings, the fuel oil cost of the flotation unit was reduced by a higher percentage than the fuel oil consumption, due to the decreasing tendency of fuel oil prices during 2014 and 2015. Reductions of 52 and 68% were obtained in the first and second periods of operation, respectively, when compared to 2013. In addition, not only does the SGSP have considerably reduced operating costs but also the environmental costs are clearly reduced when considering the reduction of CO2 emissions.
CitationAlcaraz, A., Montalà, M., Cortina, J., Akbarzadeh, A., Aladjem, C., Farran, A., Valderrama, C. Design, construction, and operation of the first industrial salinity-gradient solar pond in Europe: An efficiency analysis perspective. "Solar energy", Abril 2018, vol. 164, p. 316-326.
URIhttp://hdl.handle.net/2117/116750
DOI10.1016/j.solener.2018.02.053
ISSN0038-092X
Publisher versionhttps://www.sciencedirect.com/science/article/pii/S0038092X18301865
Collections
Share: