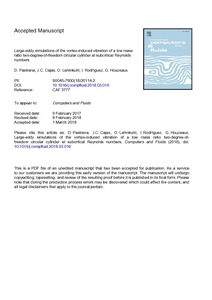 Document typeArticle
PublisherElsevier
Rights accessOpen Access
Abstract
The vortex induced vibration phenomenon of a low mass ratio () two-degree-of-freedom circular cylinder at subcritical Reynolds numbers ( 5300, 11,000) has been investigated by means of large-eddy simulations. A low-dissipative spatial and time discretisation finite element schemes have been implemented and combined with the Wall-Adapting Local-Eddy viscosity (WALE) subgrid-scale model to solve the filtered incompressible flow equations. Several values of the reduced velocity in the range 3 ⩽ U* ⩽ 12 have been considered. The numerical results are extensively compared with available experimental and numerical data. Particular interest has been placed in the region of maximum cross-flow amplitudes, the super-upper branch, where previous high-fidelity numerical simulations have underestimated the peak amplitudes compared with experimental results. The transition between the super-upper and lower branches is also shown and described. The numerical simulations successfully reproduce the three-branch response maximum oscillation amplitudes and associated vortex formation modes. The 2T vortex formation mode, i.e. two triplets of vortices per oscillation period, has been observed to occur in the super-upper branch, for the three different values of the Reynolds number investigated. These results contradict the claim made in previous works [27] that the vortex formation mode in the super-upper branch is Reynolds number dependent. Beats are observed to appear prior the transition from the super-upper to the lower branch. It is argued that they may be related with the coherence and strength of the third vortex shed at the shoulder of the cylinder each half-cycle, which is finally suppressed in the transition to the lower branch.
CitationPastrana, D., Cajas, J., Lehmkuhl, O., Rodriguez, I., Houzeaux, G. Large-eddy simulations of the vortex-induced vibration of a low mass ratio two-degree-of-freedom circular cylinder at subcritical Reynolds numbers. "Computers and fluids", Setembre 2018, vol. 173, p. 118-132.
URIhttp://hdl.handle.net/2117/116743
DOI10.1016/j.compfluid.2018.03.016
ISSN0045-7930
Publisher versionhttps://www.sciencedirect.com/science/article/pii/S0045793018301142
Collections
Share: