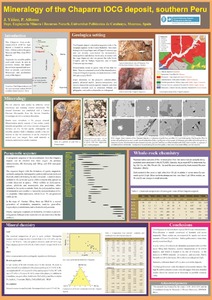 CovenanteeRed Social
Document typeConference lecture
PublisherEuropean Geosciences Union (EGU)
Rights accessOpen Access
All rights reserved. This work is protected by the corresponding intellectual and industrial property rights. Without prejudice to any existing legal exemptions, reproduction, distribution, public communication or transformation of this work are prohibited without permission of the copyright holder
Abstract
The Chaparra IOCG, located in southern Peru, near Chala, is mined and exploited by small-scale miners for gold, however, it has not been studied until now. Here we present a preliminary geological and mineralogic study of this deposit. Powder X ray diffraction, electron microscopy and electron microprobe were used to characterize the mineralization. This deposit is hosted in magmatic rocks from the Coastal Batholith. Host rocks belong to the Linga Super-unit, of Upper Cretaceous age and are mainly constituted by monzonites, monzogabbros and diorites. Major alterations are the propylitic (chlorite - albite - quartz), advanced argillic (jarosite - natrojarosite) and sericitic (muscovite-sericite-quartz). Gypsum and other alteration minerals such as potassium feldspar and phlogopite, vermiculite and natrolite are widespread. Mineralization occurs mainly in quartz veins up to 1 m thick, emplaced filling fractures. Ore mineralogy is mainly composed of hematite, goethite, and sulphides (mainly pyrite, chalcopyrite and covellite). Gold and REE-rich minerals also occur. Native gold can reach up to 1 mm in size, but usually is few m in size. Its composition is 82-92 wt% Au, up to 12 wt% of Ag and Fe can reach up to 4 wt%. The paragenetic sequence in the Chaparra deposit was divided into three stages: (I) primary mineralization, (II) Fracture filling, and (III) supergene alteration. The sequence begins with the crystallization of magnetite, quartz, pyrrhotite and pyrite. Subsequently, native gold, native Bismuth and uraninite crystallices together with the former minerals, in which are enclosed. Later, monacite is formed, being enclosed in quartz. Pyrite also presents small grains of chalcopyrite inside. Galena, sphalerite and arsenopyrite also are formed, whether included in pyrite or outside. Scarce grains of sakuraiite also occur in this stage. Structural formula of sakuraiie from this deposit is Cu 01.78-1.90 Zn 0.07-12Fe 1.16-124In 0.22-0.26Sn 0.79-082S4). Indium content of this mineral is between 5.43 and 6.41 wt%. At the end of this stage hematite and Cu-rich minerals, mainly tetrahedrite and covellite are formed. In addition, other sulphosalts, as tennantite and annivite are generated. Rrutile, zircon, apatite and subsequently ferrocordierite are also formed. In the stage (II) fractures are produced and filled by tetrahedrite, garavellite and native bismuth. Finally, in the stage (III) supergene alteration generates goethite, jarosite, gypsum, scorodite and yodargirite.
Location
1: Caravelí Province, Perú
CitationYáñez, J., Alfonso, P. Mineralogy of the Chaparra IOCG deposit, southern Peru. A: European Geosciences Union General Assembly. "Geophysical research abstracts, 2014, vol. 16, EGU2014-15675". European Geosciences Union (EGU), 2014.
URIhttp://hdl.handle.net/2117/116680
ISBN1607-7962
Publisher versionhttps://meetingorganizer.copernicus.org/EGU2014/EGU2014-15675.pdf
Collections
Share: