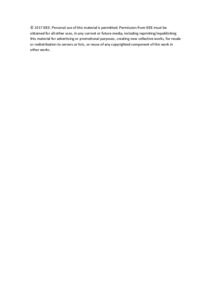 Document typeConference report
PublisherInstitute of Electrical and Electronics Engineers (IEEE)
Rights accessOpen Access
All rights reserved. This work is protected by the corresponding intellectual and industrial property rights. Without prejudice to any existing legal exemptions, reproduction, distribution, public communication or transformation of this work are prohibited without permission of the copyright holder
Abstract
This paper describes an underwater mobile target localization and tracking by using an autonomous surface vehicle for which the successive ranges between the target and the reference are the only information. In a dynamic system, such as range-only single-beacon underwater target tracking, a statespace model can be characterized, where the state vector may include position, and velocity of the mobile underwater target. Moreover, the range observations can come from a mobile autonomous vehicle, which is used as a moving landmark. Then, a nonlinear Bayesian filtering algorithm can be used to make extrapolations on the state vector from the observations, in order to obtain the target position at each instant of time. In this paper we consider the use of Particle Filter (PF) to perform such localization and tracking where its performance and characterization is studied under different scenarios
CitationMasmitja, I., Bouvet, P., Gomariz, S., Aguzzi, J., Del Rio, J. Underwater mobile target tracking with particle filter using an autonomous vehicle. A: OCEANS IEEE/MTS Aberdeen. "OCEANS 2017 - Aberdeen: 19-22 June 2017". Institute of Electrical and Electronics Engineers (IEEE), 2017, p. 1-5.
URIhttp://hdl.handle.net/2117/116604
DOI10.1109/OCEANSE.2017.8084692
ISBN978-1-5090-5278-3
Publisher versionieeexplore.ieee.org
Collections
Share: