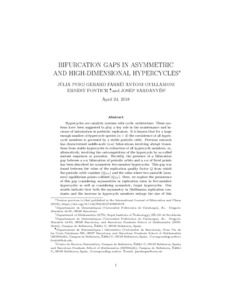 Fontich Julia, Ernest
Sardanyes, Josep
Document typeArticle
Rights accessOpen Access
Abstract
Hypercycles are catalytic systems with cyclic architecture. These systems have been suggested to play a key role in the maintenance and increase of information in prebiotic replicators. It is known that for a large enough number of hypercycle species (n>4 the coexistence of all hypercycle members is governed by a stable periodic orbit. Previous research has characterized saddle-node (s-n) bifurcations involving abrupt transitions from stable hypercycles to extinction of all hypercycle members, or, alternatively, involving the outcompetition of the hypercycle by so-called mutant sequences or parasites. Recently, the presence of a bifurcation gap between a s-n bifurcation of periodic orbits and a s-n of fixed points has been described for symmetric five-member hypercycles. This gap was found between the value of the replication quality factor Q from which the periodic orbit vanishes (QPO)and the value where two unstable (nonzero) equilibrium points collide (QSS). Here, we explore the persistence of this gap considering asymmetries in replication rates in five-member hypercycles as well as considering symmetric, larger hypercycles. Our results indicate that both the asymmetry in Malthusian replication constants and the increase in hypercycle members enlarge the size of this gap. The implications of this phenomenon are discussed in the context of delayed transitions associated to the so-called saddle remnants. Read More: https://www.worldscientific.com/doi/abs/10.1142/S021812741830001X Read More: https://www.worldscientific.com/doi/abs/10.1142/S021812741830001X
CitationPuig, J., Farre, G., Guillamon, A., Fontich Julia, Ernest, Sardanyes, J. Bifurcation gaps in asymmetric and high-dimensional hypercycles. "International journal of bifurcation and chaos", 1 Gener 2018, vol. 28, núm. 1, p. 1830001-1-1830001-17.
URIhttp://hdl.handle.net/2117/116598
DOI10.1142/S021812741830001X
ISSN0218-1274
Collections
Share: