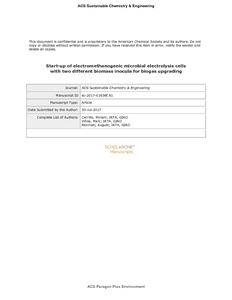 Except where otherwise noted, content on this work is licensed under a Creative Commons license : Attribution-NonCommercial-NoDerivs 3.0 Spain
Abstract
The performance and biomass enrichment of the biocathode of a pair of lab-scale two-chambered microbial electrolysis cells (MEC) were assessed for 95 days as a technology for upgrading the biogas produced in anaerobic digesters, converting CO2 into CH4 through the electromethanogenic process. Two different inocula were compared: (i) a mixture of biomass from the anode of a MEC and anaerobic granular sludge (BC1); (ii) biomass enriched in a methanol-fed upflow anaerobic sludge blanket reactor (UASB) (BC2). Quantitative and qualitative microbial community assessment of the enrichment process on the biocathodes was performed by means of high-throughput sequencing of 16S rDNA- and 16S rRNA-based massive libraries as well as RT-qPCR of 16S rRNA and mcrA genes. Although BC2 had a faster increase in current density than BC1, there were no significant differences neither in the average CH4 production (0.23 ± 0.01 and 0.22 ± 0.05 L m–3 day–1 for BC1 and BC2, respectively) nor in the cathodic methane recovery efficiency (65 ± 8% and 79 ± 17%, respectively). Independently from the origin of the inoculum, total and active archaeal microbial community in both biocathodes was dominated by hydrogenotrophic methanogenic archaea, especially belonging to Methanobacteriaceae family (mainly Methanobrevibacter genus) (84–98% of both 16S rDNA and 16S rRNA relative abundance).
CitationCerrillo, M., Viñas , M., Bonmatí, A. Startup of electromethanogenic microbial electrolysis cells with two different biomass inocula for biogas upgrading. "ACS sustainable chemistry & engineering", 7 Setembre 2017, vol. 5, núm. 10, p. 8852-8859.
URIhttp://hdl.handle.net/2117/116593
DOI10.1021/acssuschemeng.7b01636
ISSN2168-0485
Publisher versionhttp://pubs.acs.org/doi/abs/10.1021/acssuschemeng.7b01636
Collections
Share: