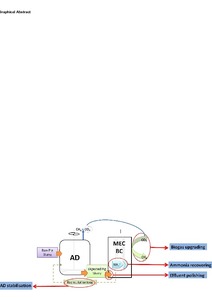 Except where otherwise noted, content on this work is licensed under a Creative Commons license : Attribution-NonCommercial-NoDerivs 3.0 Spain
Abstract
© 2017 Elsevier Ltd The integration of anaerobic digestion (AD) and a microbial electrolysis cell (MEC) with an electromethanogenic biocathode is proposed to increase the stability and robustness of the AD process against organic and nitrogen overloads; to keep the effluent quality; to recover ammonium; and to upgrade the biogas. A thermophilic lab-scale AD, fed with pig slurry, was connected in series with the bioanode compartment of a two-chambered MEC. In turn, the biocathode of the MEC was poised at -800 mV vs Standard Hydrogen Electrode and fed with CO2 to increase the methane production of the system. After doubling its organic and nitrogen loading rate, the AD operation became stable thanks to the connection of a recirculation loop with the MEC effluent. Ammonium removal in the anode compartment of the MEC achieved 14.46 g N-NH4 + m-2 d-1, while obtaining on average 79 L CH4 m-3 d-1 through the conversion of CO2 in the cathode compartment. The microbial analysis showed that methylotrophic Methanossiliicoccaceae family (Methanomassiliicoccus genus) was the most abundant among the metabolically active archaea in the AD during the inhibited state; while, on the cathode, Methanobacteriaceae family (Methanobrevibacter and Methanobacterium genus) shared dominance with Methanomassiliicoccaceae and Methanotrichaceae families (Methanomassiliicoccus and Methanothrix genus, respectively).
CitationCerrillo, M., Viñas , M., Bonmatí, A. Anaerobic digestion and electromethanogenic microbial electrolysis cell integrated system: Increased stability and recovery of ammonia and methane. "Renewable Energy", 1 Maig 2018, vol. 120, p. 178.
URIhttp://hdl.handle.net/2117/116588
DOI10.1016/j.renene.2017.12.062
ISSN1879-0682
Publisher versionhttp://www.sciencedirect.com/science/article/pii/S0960148117312661?via%3Dihub
Collections
Share: