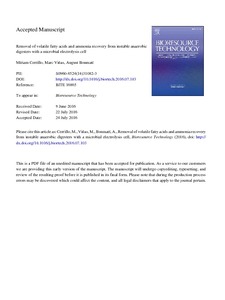 Viñas Canals, Marc
Bonmatí Blasi, August
Document typeArticle
Rights accessOpen Access
All rights reserved. This work is protected by the corresponding intellectual and industrial property rights. Without prejudice to any existing legal exemptions, reproduction, distribution, public communication or transformation of this work are prohibited without permission of the copyright holder
Abstract
Continuous assays with a microbial electrolysis cell (MEC) fed with digested pig slurry were performed to evaluate its stability and robustness to malfunction periods of an anaerobic digestion (AD) reactor and its feasibility as a strategy to recover ammonia. When performing punctual pulses of volatile fatty acids (VFA) in the anode compartment of the MEC, simulating a malfunction of the AD process, an increase in the current density was produced (up to 14 times, reaching values of 3500 mA m-2) as a result of the added chemical oxygen demand (COD), especially when acetate was used. Furthermore, ammonium diffusion from the anode to the cathode compartment was enhanced and the removal efficiency achieved up to 60% during daily basis VFA pulses. An AD-MEC combined system has proven to be a robust and stable configuration to obtain a high quality effluent, with a lower organic and ammonium content
CitationCerrillo, M., Viñas , M., Bonmatí, A. Removal of volatile fatty acids and ammonia recovery from unstable anaerobic digesters with a microbial electrolysis cell. "Bioresource technology", 1 Novembre 2016, vol. 219, p. 348-356.
URIhttp://hdl.handle.net/2117/116496
DOI10.1016/j.biortech.2016.07.103
ISSN0960-8524
Publisher versionhttp://www.sciencedirect.com/science/article/pii/S0960852416310823
Collections
Share: