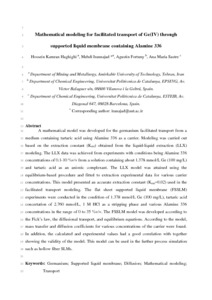 A mathematical model was developed for the germanium facilitated transport from a medium containing tartaric acid using Alamine 336 as a carrier. Modeling was carried out based on the extraction constant (Kext) obtained from the liquid-liquid extraction (LLX) modeling. The LLX data was achieved from experiments with conditions being Alamine 336 concentrations of 0.1-10 %v/v from a solution containing about 1.378 mmol/L Ge (100 mg/L) and tartaric acid as an anionic complexant. The LLX model was attained using the equilibrium-based procedure and fitted to extraction experimental data for various carrier concentrations. This model presented an accurate extraction constant (Kext=0.02) used in the facilitated transport modeling. The flat sheet supported liquid membrane (FSSLM) experiments were conducted in the condition of 1.378 mmol/L Ge (100 mg/L), tartaric acid concertation of 2.760 mmol/L, 1 M HCl as a stripping phase and various Alamine 336 concentrations in the range of 0 to 35 %v/v. The FSSLM model was developed according to the Fick’s law, the diffusional transport, and equilibrium equations. According to the model, mass transfer and diffusion coefficients for various concentrations of the carrier were found. In addition, the calculated and experimental values had a good correlation with together showing the validity of the model. This model can be used in the further process simulation such as hollow fiber SLMs.
CitationKamran, H., Irannajad, M., Fortuny, A., Sastre, A. Mathematical modeling for facilitated transport of Ge(IV) through supported liquid membrane containing Alamine 336. "Chemical papers", 1 Abril 2018, vol. 72, núm. 4, p. 955-970.
URIhttp://hdl.handle.net/2117/116493
DOI10.1007/s11696-017-0332-3
ISSN0366-6352
Publisher versionhttps://link.springer.com/article/10.1007/s11696-017-0332-3
Other identifiershttps://www.researchgate.net/publication/321073999_Mathematical_modeling_for_facilitated_transport_of_GeIV_through_supported_liquid_membrane_containing_Alamine_336