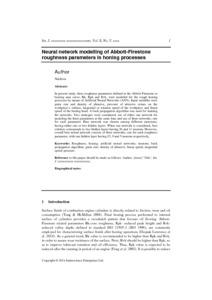 Document typeArticle
Rights accessOpen Access
Abstract
In present study, three roughness parameters defined in the Abbott-Firestone or bearing area curve, Rk, Rpk and Rvk, were modelled for rough honing processes by means of artificial neural networks (ANN). Input variables were grain size and density of abrasive, pressure of abrasive stones on the workpiece's surface, tangential or rotation speed of the workpiece and linear speed of the honing head. Two strategies were considered, either use of one network for modelling the three parameters at the same time or use of three networks, one for each parameter. Overall best neural network consists of three networks, one for each roughness parameter, with one hidden layer having 25, nine and five neurons for Rk, Rpk and Rvk respectively. However, use of one network for the three roughness parameters would allow addressing an indirect model. In this case, best solution corresponds to two hidden layers having 26 and 11 neurons.
CitationSivatte, M., Buj, I., Parra, X. Neural network modelling of Abbott-Firestone roughness parameters in honing processes. "International journal of surface science and engineering", 29 Desembre 2017, vol. 11, núm. 6, p. 512-530.
URIhttp://hdl.handle.net/2117/116491
DOI10.1504/IJSURFSE.2017.088973
ISSN1749-785X
Publisher versionhttps://www.inderscienceonline.com/doi/abs/10.1504/IJSURFSE.2017.088973
Other identifiershttps://www.researchgate.net/publication/322133427_Neural_network_modelling_of_Abbott-Firestone_roughness_parameters_in_honing_processes
Collections
Share: