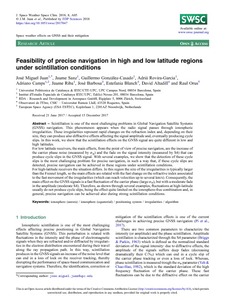 Altadill, David
Orús Pérez, Raul
Document typeArticle
Rights accessOpen Access
Abstract
Scintillation is one of the most challenging problems in Global Navigation Satellite Systems (GNSS) navigation. This phenomenon appears when the radio signal passes through ionospheric irregularities. These irregularities represent rapid changes on the refraction index and, depending on their size, they can produce also diffractive effects affecting the signal amplitude and, eventually producing cycle slips. In this work, we show that the scintillation effects on the GNSS signal are quite different in low and high latitudes. For low latitude receivers, the main effects, from the point of view of precise navigation, are the increase of the carrier phase noise (measured by s¿) and the fade on the signal intensity (measured by S4) that can produce cycle slips in the GNSS signal. With several examples, we show that the detection of these cycle slips is the most challenging problem for precise navigation, in such a way that, if these cycle slips are detected, precise navigation can be achieved in these regions under scintillation conditions. For high-latitude receivers the situation differs. In this region the size of the irregularities is typically larger than the Fresnel length, so the main effects are related with the fast change on the refractive index associated to the fast movement of the irregularities (which can reach velocities up to several km/s). Consequently, the main effect on the GNSS signals is a fast fluctuation of the carrier phase (large s¿), but with a moderate fade in the amplitude (moderate S4). Therefore, as shown through several examples, fluctuations at high-latitude usually do not produce cycle slips, being the effect quite limited on the ionosphere-free combination and, in general, precise navigation can be achieved also during strong scintillation conditions.
CitationJuan, J., Sanz, J., Gonzalez-Casado, G., Rovira-Garcia, Adrià., Camps, A., Riba, J., Barbosa, J., Blanch, E., Altadill, D., Orús, R. Feasibility of precise navigation in high and low latitude regions under scintillation conditions. "Journal of Space Weather and Space Climate", 6 Febrer 2018, vol. 8, núm. A05, p. 1-11.
URIhttp://hdl.handle.net/2117/116484
DOI10.1051/swsc/2017047
ISSN2115-7251
Publisher versionhttps://www.swsc-journal.org/articles/swsc/abs/2018/01/swsc170055/swsc170055.html
Collections
Share: