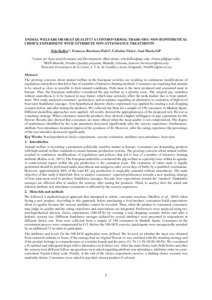 Vieira, Ceferina
Document typeConference lecture
PublisherAsociación Española de Economía Agraria
Rights accessOpen Access
Abstract
The growing concerns about animal welfare in the European societies are resulting in continuous modifications of regulations and policies that led to ban of a number of intensive farming methods. Consumers are requiring that animals to be raised as close as possible to their natural conditions. Pork meat is the most produced and consumed meat in Europe. Thus, the European authorities considered the pig welfare as a priority issue. The surgical pig castration without anaesthesia is to be banned in near future, which may seriously affect the pork market due to boar tainted-meat. This study analysed consumers’ preferences and acceptance regarding an alternative to castration of high-level boar-taint frankfurter sausages. Non-hypothetical discrete choice experiment was applied by creating a real shopping scenario before and after tasting the products. We collected the Data for a sample of 150 consumers in Madrid, Spain. Different modelling approaches were applied. All results showed the appropriateness of the proposed new flavour as a masking strategy. When consumers tasted the products, they showed a higher willingness to pay a premium for this flavour. Results also showed that consumers are more ethical when the meat quality is not compromised. The degree of randomness identified by the scale parameter decreased significantly after the sensory experience. Furthermore, attribute Non-attendance treatment improved the goodness of fit. However, after the eating experience the percentage of the non-attenders decreased significantly.
CitationKallas, Z., Borrisser-Pairó, F., Gil, J.M., Vieira, C. Animal welfare or meat quality? A controversial trade-off: a non-hypothetical choice experiment with attribute non-attendance treatment. A: Congreso de Economía Agraria. "XI Congreso de la Asociación Española De Economía Agraria; Orihuela, Elche: 13-15 septiembre, 2017: libro de actas". Asociación Española de Economía Agraria, 2017, p. 412-413.
URIhttp://hdl.handle.net/2117/116464
ISBN978-84-16024-62-9
Publisher versionhttp://seea.chil.org/
Other identifiershttp://xi-congreso.chil.org/download-file/b9912588-5234-4a16-b7d5-f61b445fa0aa/
Collections
Share: