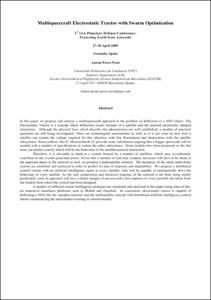 Document typeConference lecture
Rights accessOpen Access
Abstract
In this paper we propose and analyse a multispacecraft approach to the problem of deflection of a NEO object. The Electrostatic Tractor is a concept where deflection occurs because of a satellite and the asteroid electrically charged interaction. Although the physical laws which describe this phenomenon are well established, a number of practical questions are still being investigated. There are technological uncertainties as well, as it is not clear by now how a satellite can sustain the voltage required for this objective with few fluctuations and interactions with the satellite subsystems. Some authors, like E. Messerchmidt [1] provide some calculations arguing that a bigger spacecraft will be needed with a number of specifications to isolate the other subsystems. Some models have been proposed so far, but none can predict exactly which will be the behaviour of the satellite-asteroid interaction. Therefore, it is advisable to think in a system formed by a number of satellites, which may co-ordinately contribute to the overall generated power. Given that a number of real-time complex decisions will have to be made in the approach phase to the asteroid as well, we propose a multisatellite solution. The dynamics of the entire multi-body system are simulated and analyzed in order to predict its time of response and adaptability. We propose a distributed control system with an artificial intelligence agent in every satellite, who will be capable of automatically drive the behaviour of every satellite. As the real composition and electrical response of the asteroid is far from being totally predictable, such an approach will have a better margin of success and a fast response to every possible deviation from the models from which the system had been designed. A number of different swarm intelligence strategies are simulated and analyzed in this paper using state-of-theart numerical simulators platforms such as Matlab and Simulink. In conclusion, electrostatic tractor is capable of deflecting a NEO like the Apophis asteroid, and the multisatellite concept with distributed artificial intelligence control allows counteracting the uncertainties existing in current models.
CitationPerez-Poch, A. Multispacecraft electrostatic tractor with swarm optimitzation. A: IAA Planetary Defense Conference. "1st IAA Planetary Defense Conference". 2009.
URIhttp://hdl.handle.net/2117/11642
Publisher versionhttp://www.congrex.nl/09c04/
Collections
Share: