Overview of the experimental tests in prototype 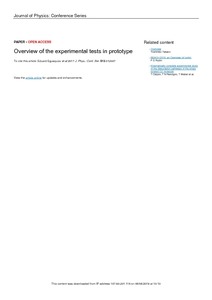 Document typeConference report
PublisherInstitute of Physics (IOP)
Rights accessOpen Access
ProjectHYPERBOLE - HYdropower plants PERformance and flexiBle Operation towards Lean integration of new renewable Energies (EC-FP7-608532)
Abstract
Experimental tests in prototype are necessary to understand the dynamic behaviour of the machine during different operating points. Hydraulic phenomena as well as its effect on the structure need to be studied in o rder to avoid instabilities during operation and to extend the life - time of the different components. For this purpose, a complete experimental study of a large Francis turbine prototype has been performed installing several sensors along the machine. Pres sure sensors were installed in the penstock, spiral case, runner and draft tube, strain gauges were installed in the runner, vibration sensors were used in the stationary parts and different electrical and operational parameters were also measured. All the se signals were acquired simultaneously for different operating points of the turbine.
CitationEgusquiza, E., Valentin, D., Presas, A., Valero, M. Overview of the experimental tests in prototype. A: HYPERBOLE Conference (HYdropower plants PERformance and flexiBle Operation towards Lean integration of new renewable Energies). "Journal of physics: conference series, vol. 813, no. 1, April 4, 2017". Londres: Institute of Physics (IOP), 2017, p. 1-5.
URIhttp://hdl.handle.net/2117/116417
DOI10.1088/1742-6596/813/1/012037
ISBN1742-6596
Publisher versionhttp://iopscience.iop.org/article/10.1088/1742-6596/813/1/012037
Collections
Share: