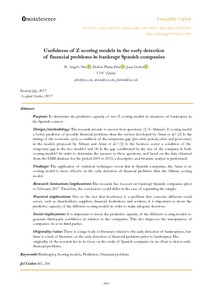 Purpose: To determine the predictive capacity of two Z scoring models in situations of bankruptcy in the Spanish context. Design/methodology: The research intends to answer four questions: (1) Is Altman's Z scoring model a better predictor of possible financial problems than the version developed by Amat et al.? (2) Is the timing of the economic cycle a condition of the temporary gap (pre-crisis period, crisis and post-crisis) in the models proposed by Altman and Amat et al.? (3) Is the business sector a condition of the temporary gap in the two models? and (4) Is the gap conditioned by the size of the company in both scoring models? In order to determine the answers to these questions, and based on the data obtained from the SABI database for the period 2005 to 2015, a descriptive and bivariate analysis is performed. Findings: The application of statistical techniques reveal that in Spanish companies, the Amat et al. scoring model is more effective in the early detection of financial problems than the Altman scoring model. Research limitations/implications: The research has focused on bankrupt Spanish companies prior to February 2017. Therefore, the conclusions could differ in the case of expanding the sample. Practical implications: Due to the fact that insolvency is a problem that concerns different social actors, such as shareholders, suppliers, financial institutions and workers, it is important to know the predictive capacity of the different scoring models in order to make adequate decisions. Social implications: It is important to know the predictive capacity of the different scoring models to generate third-party confidence in relation to the companies. This also improves the transparency of companies vis-à-vis third parties. Originality/value: There is a large body of literature related to the early detection of bankruptcies, but there is a lack of literature on the early detection of financial problems prior to bankruptcy. The originality of the research lies in its focus on the study of Spanish companies in an effort to detect early financial problems.