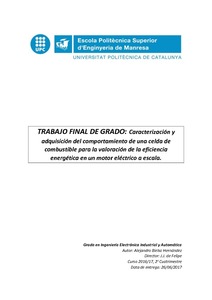 Document typeBachelor thesis
Rights accessOpen Access
All rights reserved. This work is protected by the corresponding intellectual and industrial property rights. Without prejudice to any existing legal exemptions, reproduction, distribution, public communication or transformation of this work are prohibited without permission of the copyright holder
Abstract
This thesis is part of the previous line of research carried out by the students of the mechanics specialty together with the Department of mechanics and fluids, who developed a Fuel Cell together further to a prototype of a small vehicle connected to another Cell, this last operative in the Discharge phase, which one allows to generate a current able to feeds two rotors connected in parallel resulting in the vehicle's movement. The purpose of this project is to contribute and analyze the electrochemical processes from the Fuel Cells subjected to experimental tests to record the relationship between the theoretical and experimental areas and obtain these results by establishing a data acquisition system (LabVIEW) that could help us to see in real the consequent values of the process. As a consequence, it is intended to define all parameters in precise manner through the devices with which I will work on. All this to finally evaluate and ensure the performance obtained from the cell in order to demonstrate if its efficiency and the effects it causes are worthy of having a more relevant role as renewable energy in the future to come. Generally, the fuel cells or also called cells usually have an energy efficiency between 30 - 60%, and can reach up to 85 - 90% if they capture the heat released for use. However, as I am working with a prototype assembly that has been somewhat less elaborate, I expect efficiency levels less than 20%. The system of acquisition of this work starts from the classification of the two stages to discuss: the first will be the loading phase of the first fuel cell. And the second, the discharge phase from the little vehicle. Both names are referred to the different functions in which they can work it. Consequently, it will make a series of previous tests on the model with the aim to estimate the volume of hydrogen necessary to be able to start up the mini vehicle. Thereafter, from the quantity of the product and the consumption required, an average of the different samples are made together with stoichiometric calculations to determine the theoretical data with which to work. Secondly, after knowing the values in which the system should operate, we must find the relationship between stoichiometric and electro-chemical data. Taking into account that when we are working at extremely small levels like these, any minimum variable or factor can cause inconsistencies and errors. Therefore, knowing the working ranges of the variables to be studied of the cell and the behavior that it covers and the possible errors, it is made a list of the necessary material to use later during the taking of data. Thirdly, in reference to the process’s material chosen previously, it’s necessary a plaque computer, Arduino ONE WIFI, with two sensors of effect Hall like the ACS712 to obtain the values of the current that circulate in the two stages of the system. Together with resistors, leds and others, establishing a serial communication with my PC, in order to transfer the information, finally after calibrate the sensitivity of the sensors, design of the appropriate software and monitored the equivalent data between model and PC , lastly the interface will be designed through LabVIEW. As output data, the interface displays the results of both Cell processes, whether volumetric flows, potentials variation, internal resistances, characteristic curves, yields and more. All these fundamental magnitudes, observable at all points during the course of the process
SubjectsFuel cells--Design and construction, Electric motors--Energy consumption, Piles de combustible, Motors elèctrics
DegreeGRAU EN ENGINYERIA ELECTRÒNICA INDUSTRIAL I AUTOMÀTICA (Pla 2009)
URIhttp://hdl.handle.net/2117/116390
Collections
Share: