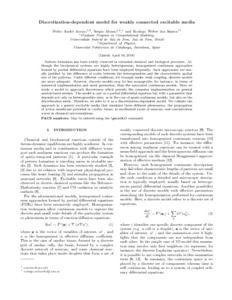 Weber dos Santos, Rodrigo
Document typeArticle
PublisherAmerican Chemical Society (ACS)
Rights accessOpen Access
Abstract
Pattern formation has been widely observed in extended chemical and biological processes. Although the biochemical systems are highly heterogeneous, homogenized continuum approaches formed by partial differential equations have been employed frequently. Such approaches are usually justified by the difference of scales between the heterogeneities and the characteristic spatial size of the patterns. Under different conditions, for example, under weak coupling, discrete models are more adequate. However, discrete models may be less manageable, for instance, in terms of numerical implementation and mesh generation, than the associated continuum models. Here we study a model to approach discreteness which permits the computer implementation on general unstructured meshes. The model is cast as a partial differential equation but with a parameter that depends not only on heterogeneities sizes, as in the case of quasicontinuum models, but also on the discretization mesh. Therefore, we refer to it as a discretization-dependent model. We validate the approach in a generic excitable media that simulates three different phenomena: the propagation of action membrane potential in cardiac tissue, in myelinated axons of neurons, and concentration waves in chemical microemulsions.
CitationArroyo, P. A., Alonso, S., Weber, R. Discretization-dependent model for weakly connected excitable media. "Physical review E", 23 Març 2018, vol. 97, núm. 3, p. 032214-1-032214-13.
URIhttp://hdl.handle.net/2117/116351
DOI10.1103/PhysRevE.97.032214
ISSN2470-0045
Collections
Share: