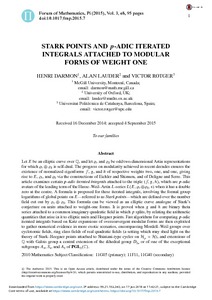 Document typeArticle
PublisherCambridge University Press
Rights accessOpen Access
Abstract
Let be an elliptic curve over , and let and be odd two-dimensional Artin representations for which is self-dual. The progress on modularity achieved in recent decades ensures the existence of normalized eigenforms , , and of respective weights two, one, and one, giving rise to , , and via the constructions of Eichler and Shimura, and of Deligne and Serre. This article examines certain -adic iterated integrals attached to the triple , which are -adic avatars of the leading term of the Hasse–Weil–Artin -series when it has a double zero at the centre. A formula is proposed for these iterated integrals, involving the formal group logarithms of global points on —referred to as Stark points—which are defined over the number field cut out by . This formula can be viewed as an elliptic curve analogue of Stark’s conjecture on units attached to weight-one forms. It is proved when and are binary theta series attached to a common imaginary quadratic field in which splits, by relating the arithmetic quantities that arise in it to elliptic units and Heegner points. Fast algorithms for computing -adic iterated integrals based on Katz expansions of overconvergent modular forms are then exploited to gather numerical evidence in more exotic scenarios, encompassing Mordell–Weil groups over cyclotomic fields, ring class fields of real quadratic fields (a setting which may shed light on the theory of Stark–Heegner points attached to Shintani-type cycles on ), and extensions of with Galois group a central extension of the dihedral group or of one of the exceptional subgroups , , and of
Description
This article has been published in a revised form in Forum of Mathematics Pi, http://dx.doi.org/10.1017/fmp.2015.7. This version is free to view and download for private research and study only. Not for re-distribution, re-sale or use in derivative works. © 2015.
CitationDarmon, H., Lauder, A., Rotger, V. Stark points and p-adic iterated integrals attached to modular forms of weight one. "Forum of Mathematics Pi", 1 Gener 2015, vol. 3, núm. e8, p. 1-95.
URIhttp://hdl.handle.net/2117/116342
DOI10.1017/fmp.2015.7
ISSN2050-5086
Publisher versionhttps://www.cambridge.org/core/services/aop-cambridge-core/content/view/7E9052A98F3BAA26F2BBB9EDBB1AC371/S2050508615000074a.pdf/stark_points_and_p_adic_iterated_integrals_attached_to_modular_forms_of_weight_one.pdf
Collections
Share: