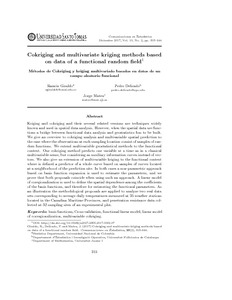 Except where otherwise noted, content on this work is licensed under a Creative Commons license : Attribution-NonCommercial-NoDerivs 3.0 Spain
Abstract
Kriging and cokriging and their several related versions are techniques widely known and used in spatial data analysis. However, when the spatial data are functions a bridge between functional data analysis and geostatistics has to be built. I give an overview to cokriging analysis and multivariable spatial prediction to the case where the observations at each sampling location consist of samples of random functions. I extend multivariable geostatistical methods to the functional context. Our cokriging method predicts one variable at a time as in a classical multivariable sense, but considering as auxiliary information curves instead of vectors. I also give an extension of multivariable kriging to the functional context where is defined a predictor of a whole curve based on samples of curves located at a neighborhood of the prediction site. In both cases a non-parametric approach based on basis function expansion is used to estimate the parameters, and I prove that both proposals coincide when using such an approach. A linear model of coregionalization is used to define the spatial dependence among the coefficients of the basis functions, and therefore for estimating the functional parameters. As an illustration the methodological proposals are applied to analyze two real data sets corresponding to average daily temperatures measured at 35 weather stations located in the Canadian Maritime Provinces, and penetration resistance data collected at 32 sampling sites of an experimental plot.
CitationGiraldo, R., Delicado, P., Mateu, J. Cokriging and multivariate kriging methods based on data of a functional random field. "Comunicaciones en Estadística", 23 Desembre 2017, vol. 10, núm. 2, p. 315-344.
URIhttp://hdl.handle.net/2117/116322
ISSN2027-3355
Publisher versionhttp://revistas.usantotomas.edu.co/index.php/estadistica/article/view/3645
Collections
Share: