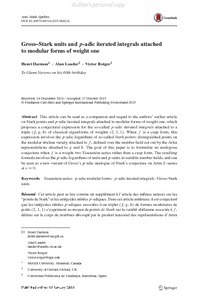 Document typeArticle
Rights accessOpen Access
All rights reserved. This work is protected by the corresponding intellectual and industrial property rights. Without prejudice to any existing legal exemptions, reproduction, distribution, public communication or transformation of this work are prohibited without permission of the copyright holder
Abstract
This article can be read as a companion and sequel to the authors’ earlier article on Stark points and p-adic iterated integrals attached to modular forms of weight one, which proposes a conjectural expression for the so-called p -adic iterated integrals attached to a triple (f, g, h) of classical eigenforms of weights (2, 1, 1). When f is a cusp form, this expression involves the p-adic logarithms of so-called Stark points: distinguished points on the modular abelian variety attached to f, defined over the number field cut out by the Artin representations attached to g and h. The goal of this paper is to formulate an analogous conjecture when f is a weight two Eisenstein series rather than a cusp form. The resulting formula involves the p-adic logarithms of units and p-units in suitable number fields, and can be seen as a new variant of Gross’s p-adic analogue of Stark’s conjecture on Artin L-series at s=0 .
Description
The final publication is available at Springer via http://dx.doi.org/10.1007/s40316-015-0042-6
CitationDarmon, H., Lauder, A., Rotger, V. Gross-Stark units and p-adic iterated integrals attached to modular forms of weight one. "Annales mathématiques du Québec", 1 Agost 2016, vol. 40, núm. 2, p. 325-354.
URIhttp://hdl.handle.net/2117/116319
DOI10.1007/s40316-015-0042-6
ISSN2195-4755
Publisher versionhttps://link.springer.com/article/10.1007%2Fs40316-015-0042-6
Collections
Share: