Is it still necessary to continue to collect crop genetic resources in the Mediterranean area? a case study in Catalonia 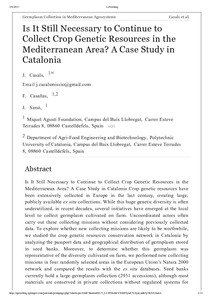 Except where otherwise noted, content on this work is licensed under a Creative Commons license : Attribution-NonCommercial-NoDerivs 3.0 Spain
Abstract
© 2017 The New York Botanical Garden Crop genetic resources have been extensively collected in Europe in the last century, creating large, publicly available ex situ collections. While this huge genetic diversity is often underutilized, in recent decades, several initiatives have emerged at the local level to collect germplasm cultivated on farm. Uncoordinated actors often carry out these collecting missions without considering previously collected data. To explore whether new collecting missions are likely to be worthwhile, we studied the crop genetic resources conservation network in Catalonia by analyzing the passport data and geographical distribution of germplasm stored in seed banks. Moreover, to determine whether this germplasm was representative of the diversity cultivated on farm, we performed new collecting missions in four randomly selected areas in the European Union’s Natura 2000 network and compared the results with the ex situ databases. Seed banks currently hold a large germplasm collection (2931 accessions), although most materials are conserved in private collections without regulated systems for seed regeneration and are not present as duplicates in the National Inventory. One important shortcoming of the ex situ network is that the germplasm conserved ex situ shows a low geographical coverage, representing only 35.3% of the municipalities in Catalonia. Our new missions allowed us to collect 234 accessions, mostly tomatoes (17.5%) and beans (16.2%). The ecological indicators’ richness (both at species (S) and variety (V) levels), total abundance (A), and the Shannon-Weaver diversity index calculated at species (H2, considering the different accessions of each variety as a single population) and variety levels (H3, considering the intra-varietal genetic diversity) were higher in the newly collected germplasm than in the ex situ collections, suggesting that seed banks do not accurately represent the genetic diversity still cultivated on farm. Moreover, some important landraces from each area were absent or underrepresented in the ex situ collections. Thus, it is necessary to continue to devote efforts to collecting germplasm; better organization between actors and targeting specific species/varieties can increase the efficiency of new collecting missions. As a conclusion, we propose different criteria to guide new missions and to improve the network’s conservation activities.
CitationCasals, J., Casañas, F., Simo, J. Is it still necessary to continue to collect crop genetic resources in the Mediterranean area? a case study in Catalonia. "Economic botany", 7 Setembre 2017, “This is a post-peer-review, pre-copyedit version of an article published in [insert journal title]. The final authenticated version is available online at: http://dx.doi.org/10.1007/s12231-017-9392-0, p. 1-12.
URIhttp://hdl.handle.net/2117/116311
DOI10.1007/s12231-017-9392-0
ISSN0013-0001
Publisher versionhttps://link.springer.com/article/10.1007%2Fs12231-017-9392-0
Collections
Share: